The first train to reach Kaikoura six months after the earthquake was a momentous occasion, not least for those who have put in the incredibly hard work to make it happen.This vital transport link means things can really begin to move on now, both for the rest of the rail rebuild north of Kaikoura – a stretch of between 30km and 40km - and for State Highway 1.

I was very pleased to be able to witness the arrival of the first train from Christchurch and to be able to congratulate a few of the great many people who were responsible for making it happen.

Trains using the re-opened section of rail can only travel at very slow speeds of about 10kmh north of Oaro due to the rails having rusted which makes braking difficult, they also have to negotiate a damaged tunnel. The sheer amount of vital materials and equipment one train can deliver in one go makes this slow trip more than worthwhile.

I cannot understate the effort that rail and road workers have put in, and continue to put in, to reach this point. They are operating in some incredibly tough and risky conditions, often in sub-zero temperatures. As an example, I recently visited a crew constructing a sea wall for the road at Rakautara.

Here, the concrete footing for the wall can only be worked on at low tide, which includes the middle of the night if that is when the tide occurs. Even during the day, this area of coastline doesn’t see much sun so it’s very cold and damp, but crews are nevertheless doing a really good job and making great progress.I have also been back to visit the temporary workers’ village just outside of Kaikoura. At the time, about 140 people had already moved in and work continues to have the camp fully finished by next month.

The village really is a very impressive facility, and the speed at which it’s all been assembled to such a high standard is quite phenomenal. On completion, the camp will be holding a public open day, so keep your eye out for details on that. Kaikoura itself is starting to look and feel much busier than it was.

There is a lot more traffic on the roads within the town than there was even just one month ago. Yes, most of that traffic belongs to road crews and other workers, not tourists, but what it means is progress towards returning to normality and in the meantime, jobs for locals. Kaikoura, and our whole earthquake-affected east coast, has come an incredibly long way in just six months: now that the pace has been stepped up thanks to the southern train link, we will go even further in the next six. 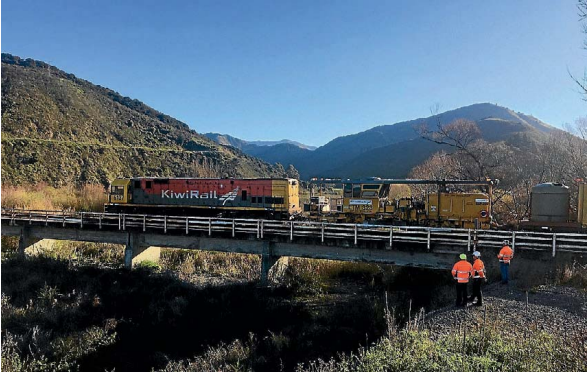 Get updates from Stuart Smith and National